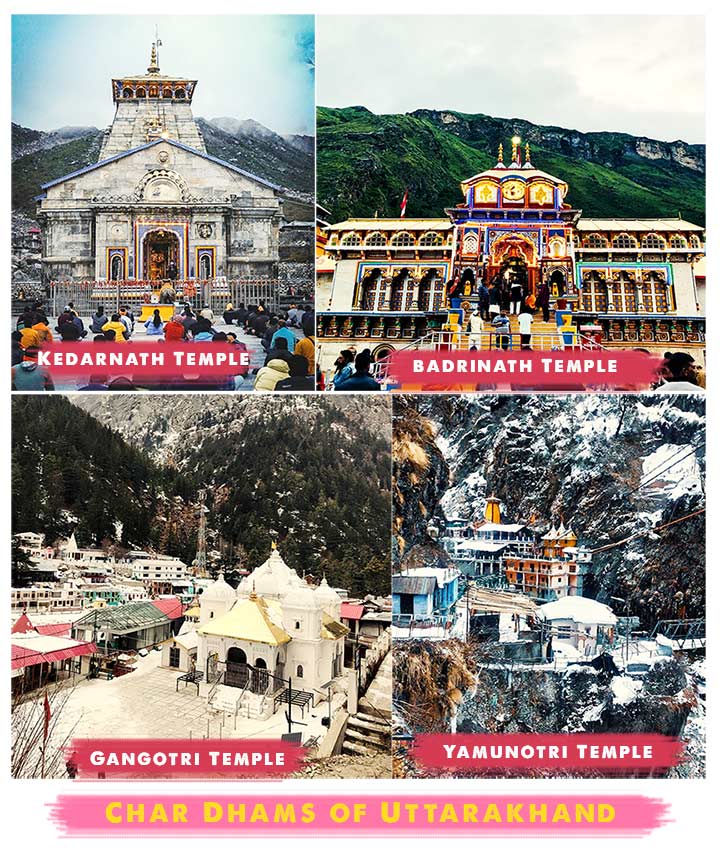 Devbhumi Uttarakhand is an abode of some of the holiest places, temples and shrine in India. Every year's thousands of Hindus, devotees and spiritual seekers come on a pilgrimage trip in Uttarakhand. Visiting Chardham is one of them as it is quoted as the easiest ways to attain moksha. The sacred shrines of Gangotri, Yamunotri, Badrinath and Kedarnath together form the sacred char Dham. Starting with the common point of Rishikesh these four shrines are formed in two distinct groups that are Gangotri, Yamunotri and Badrinath, Kedarnath

The temple of Yamunotri is the first stopover for the Char Dham yatra.  Dedicated to goddess Yamuna, it is the source point of river Yamuna. The shrine is located at the height of 6315 m the temple is surrounded by mountains from all the sites and was the home of ancient sage asit muni according to Hindu mythology. The temple of goddess Yamuna is the main shrines and there are many hot springs in the vicinity of the temple where devotees cook rice and potato and served it as prasad.

Located at the height of 3048 m above the sea level the Gangotri glacier is the main source of the sacred river Ganga. The temple is dedicated to goddess Ganga and the sacred Shila where the raja Bhagirath has worshipped lord shiva to bring Ganga to the earth. In the middle of the river, there is a natural rock which can be seen in winter when the water level recedes. It is believed it is the same rock where the lord shiva has received goddess Ganga.

Kedarnath: the abode of lord shiva

Kedarnath temple is one of the 12 jyotirlingas in the country and is located in the Rudraprayag district. The temple of Kedarnath is situated at the height of 3581 m and is built of solid grey stones that stand beautifully against the backdrop of Kedarnath range. According to the legend, the Pandavas came here to pray to lord shiva but the lord shiva kept eluding them and hide here in the form of a bull. When being trailed by Bhima, he immersed into the ground leaving the hump on the ground which is worshipped at the Kedarnath Dham.

It is said that the present temple of Kedarnath temple traced its origin back to the 8th century and later reconstructed by Adi guru Shankaracharya. It is said the other four part of the lord shiva fell at the rudranth, Madhmaheshwar, kalpeshwar, tungnath together along with Kedarnath these shrines are known as panch kedar.

Badrinath: the shrine of Lord Vishnu

Dedicated to Lord Badri Vishal offers an unparallel sanctity to the devotees. Located in the Narayana range Badrinath Dham is one of the main shrines among the four dominant Char Dham of India as well as Chota char Dham. The temple of Badrinath is situated on the bank of river Alaknanda and is dedicated to Lord Vishnu the preserver. The traces of Badrinath is dated back to Adi Guru Shankaracharya. The main idol of the temple is a black stone that represents lord Vishnu that is seated in the meditated state. The holy temple of Badrinath is divided into three part: grabh griha, darshan mandap and sabha mandap.

Harsil is located on the picturesque valley on the Gangotri Uttarkashi highway. Harsil is a hidden and unspoiled jewel of Uttarakhand and is perfect for people who want to spend some alone time amid nature. The serene environment, dense canopy of deodar trees, chirping of birds and gushing water of Bhagirathi make it a perfect place for weekend gateway and a must-visit during your way on Gangotri.

Rudra Prayag is a small quaint town where the confluence of river Mandakini and Alaknanda takes place. Many tourists come to visit the town to see this phenomenon. The main tourist attraction of the town is jagdamba temple and shiva temple and also the Kedarnath Dham is around 86 kilometres away from Rudraprayag. 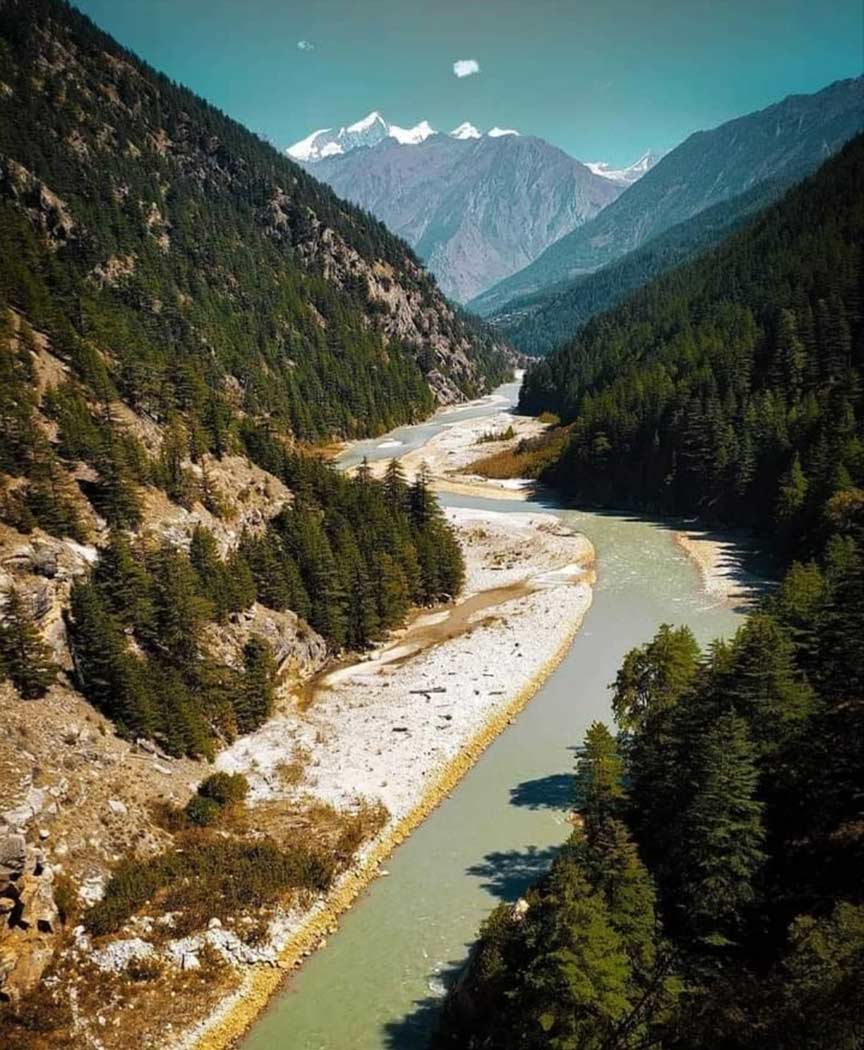 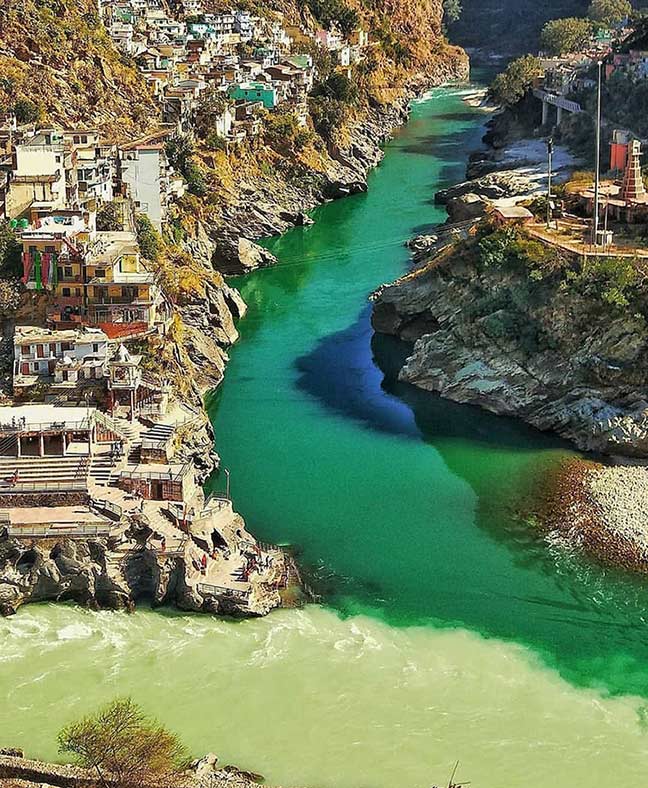 Watch the confluence of Bhagirathi and Alaknanda at Devprayag

The town of devprayag is situated at the height 830 m and is known as the last prayag of the holy confluence of Alaknanda and bhagirathi. Devprayag is known as a meeting point of river Bhagirathi and Alaknanda which together form river Ganga. This temple town of devprayag is known as winter abode of Badrinath pundits and one can easily be enthralled in the spirituality at the temple of Raghunath Ji, chandrabhadni temple, Sangam and danda Nagaraja temple. Take a dip at the ghat and indulge in adventurous activities such as kayaking, rock climbing, white water river rafting and trekking.

Go on the trek at the Valley of Flower

The valley of flower is situated at the north Chamoli district. The place is full of a meadow of various flowers and diverse flora and fauna. It is also a home of some of the endangered species such as blue sheep, musk deer and many other migratory birds. You can go on a trek at the valley of flower on your way to Badrinath.

Designated as a tourism village by Uttarakhand government it is the last village of India at the border of India and China in the Himalaya.  Located in Chamoli district Mana village is only 3 kilometres away from Badrinath Dham. According to the legend, Pandavas went through village Mana on their journey to heaven. The major attraction is bheem pool which is a huge rock bridge across the Saraswati river.

Usually, the best time for the partaking of char Dham yatra is from April end to October end.

The government of Uttarakhand announce the opening and closing dates of shrines.  Although during the monsoon season yatra should be avoided due to the risk of landslides.

As per the Hindu mythology any auspicious travel starts from west to east direction hence you need to start your pilgrimage from Yamunotri, Gangotri then proceeds to Kedarnath and finish off at Badrinath.

How to reach there

In order to commence your journey of char Dham you need to reach Rishikesh; From there you can take buses and private cabs for the route.

Jolly grant airport is the nearest airport. From here one can also take helicopter services to Badrinath and Kedarnath.

Haridwar, Rishikesh, kotdwar and Dehradun are very well connected to all the major cities of India through railway. From there you can take bus or taxi for the rest of the journey.